A Sailor Saved by Grace ... The Testimony of Rick St.James

The first twenty-three years of my life I have counted as wasted, without God and without hope in this world. I joined the United States Navy in January, 1971. I was to find out how far downward I could go.

This was to be the latter years of our nation's conflict in Vietnam. The moral decay of the 1960's was bearing its fruit --- the wrong fruit. My philosophy of life was embodied in the self centered search for "love, happiness, and the meaning of life." I hated all the traditions and the heritage of our nation (including God, family, and marriage).

I had an idealistic notion that man could somehow rise above war among nations and all human suffering could be eliminated. I believed that somehow a new age was coming (without any need for God), that man was on the edge of making it by himself. I wrote many frivolous and foolish narratives and poems in those years. I was a rebel from all authority. I hated rules and conformance to the "old ways."

To put it bluntly, I was "a hater of God"! I was an agnostic and a remote follower of Nostradamus. I was an adherent of the "New Age" before there was a "New Age" movement. George McGovern was my hero! Rock music was my life! Profanity and filthiness came from me, as like any sailor in those foreign ports.

The USS Enterprise was to be my home for four and half years. The first nine month cruise to the Vietnam Theater in the Gulf of Tonkin in 1972 is when I learned many things about the meanness and depravity of man. I wrestled and mulled things over in my mind and tried to write them down in prose. During these long, hot and humid periods at sea aboard the largest nuclear powered aircraft carrier in the world (over 6,000 men), God, in His mercy, was preparing the hard ground of my heart for the planting of the seed. The seed of the Gospel of Jesus Christ!

In April 1973, a sailor by the name of George Williamson transferred from destroyer duty to join our crew in the maintenance of our aircraft search radar. George Williamson was totally unlike anyone I had ever met up till that time. His whole manner of life, his speech and his quiet disciplined service to those in authority over him caused me to watch him like a hawk. Everyone else in our shop crew cussed and complained about everything. We would gripe about the food and the conditions aboard the ship.

We would gripe! Gripe! Gripe! but George, even under extreme hardships and pressure, would be a shining example of "clean living" in adverse conditions. I noted his honesty and plainness of speech in proclaiming this strange thing --- the Gospel of Jesus Christ. I heard over and over about the need for sinful man to come to Jesus Christ for salvation from the wrath of God to be made known at the end of this age. Strange talk! But I would listen without letting him know I was listening.

To his face I'd say "George that's enough! Don't give me any more of this religious _____". I did not believe the Bible. I felt the Bible was filled with the traditions and errors of men. "If there was a God … well, I'll be okay. I'll make it." George would quote scripture left and right! I could see some kind of power in his life. What it was, I could not figure out. I remember so clearly one related incident. Alex Neeb, a friend of George, was another one of these fanatics.

The berthing compartment on our ship had racks stacked three high. Each sailor had an assigned place for sleeping and for stowage of personal belongings. The racks had curtains supported by a braided wire cable. The incident was like this. I walked by Alex's rack and saw a silhouette of a man on his knees with his head bowed down.

Oh! Great! What an opportunity to expose a hypocrite! I pulled the curtain back with a loud snap and laughed out --- "What are you doing?" Of course, I knew what he was doing, but I just wanted to hurt Alex. Alex just looked up with a painful look. Then, his blue eyes stared with kindness toward me. He expressed no anger. Feeling uncomfortable, I walked away with a little burning of guilt building in my heart.

In May, we arrived back in the States. I remember the beautiful sight of passing under the Golden Gate Bridge. Alameda was our home port just across the bay from San Francisco. The next month we headed out to sea up the West Coast to Seattle, Washington. The Enterprise was scheduled for an extensive overhaul in the dry-dock facilities at the Bremerton Naval Shipyard. After months of George faithfully preaching Jesus Christ to me, I could no longer enjoy the drunken binges.

No longer did I enjoy the things of this world that formerly brought pleasure to me. I was getting extremely discouraged and given to long periods of thought. Pessimism for the future was taking hold --- of facing the blackness of death! "What if heaven and hell were real? What if I meet a holy God? What would I do? What about this Jesus Christ, Who claimed to be the Son of God? What will I do with Him?" It was October 27, 1973. I was alone on the eighth level in the SPS-33 radar room. The equipment was in idle --- we were in dry dock. It was late at evening --- no doubt the lights of Bremerton were shining outside, but on the inside, inside this sailor's heart, the darkness was being supernaturally dispelled! I was face to face with the question of: "If I was to die tonight, would I go to heaven?"

George had pushed this book at me: The Late Great Planet Earth. The author had just asked this question. The answer was flat out NO! It was by the reproof of God's Spirit! I didn't understand then, but I was about to go through "the narrow gate that leadeth to eternal life". In a flood of tears, all of a sudden, I realized the truth of the issues of heaven and hell. It hit me like a rock! Jesus Christ is God come in the flesh! He could save me from the wrath of God and give me eternal life. I did not, and could not, earn or deserve, what was a free gift, totally procured by another, by the second Adam, even Jesus Christ. "For by grace are ye saved through faith; and that not of yourselves: it is the gift of God: Not of works, lest any man should boast." [Ephesians 2:8, 9]

In tears, I realized the weight of my sin on me that I was going to HELL! "Oh! Jesus, I believe you are the Son of God! Please forgive me for my sin. Save me and give me the gift of eternal life. Amen!" I jumped up from the desk in that room! I knew I needed to find George. All of a sudden I realized where he was. Down the ladders (stairs for you land people) I went to the hanger bay. George Williamson was standing an industrial brow watch that night. He was in his dress blues on the brow inside the shack. I felt like I was floating in joy as I walked up to him. I had a burning in my heart to ask George just one question.

When he saw me, he had the look on his face of understanding. He knew something happened to me. I asked George this. "I just received Jesus Christ as my Lord and Savior. How can I know for sure?" I will forever remember the gleam in his eyes, while he was reaching for his pocket New Testament and opening in excitement to 1 John 5:11-13.

He said, "Rick: read this out loud." "And this the record, that God hath given to us eternal life, and this life is in his Son. He that hath the Son hath life; and he that hath not the Son of God hath not life. These things have I written unto you that believe on the name of the Son of God ; that ye may know that ye have eternal life, and that ye may believe on the name of the Son of God." Then George said; "These are written that you may know!" "Rick, it is God's Own record. He states it! Just believe it!"

That was it! That is how I got saved! I have never, never doubted what God has done concerning my salvation! I am sealed by His Holy Spirit. I am born again! A sinner saved by grace! Amen! Amen! Amen! 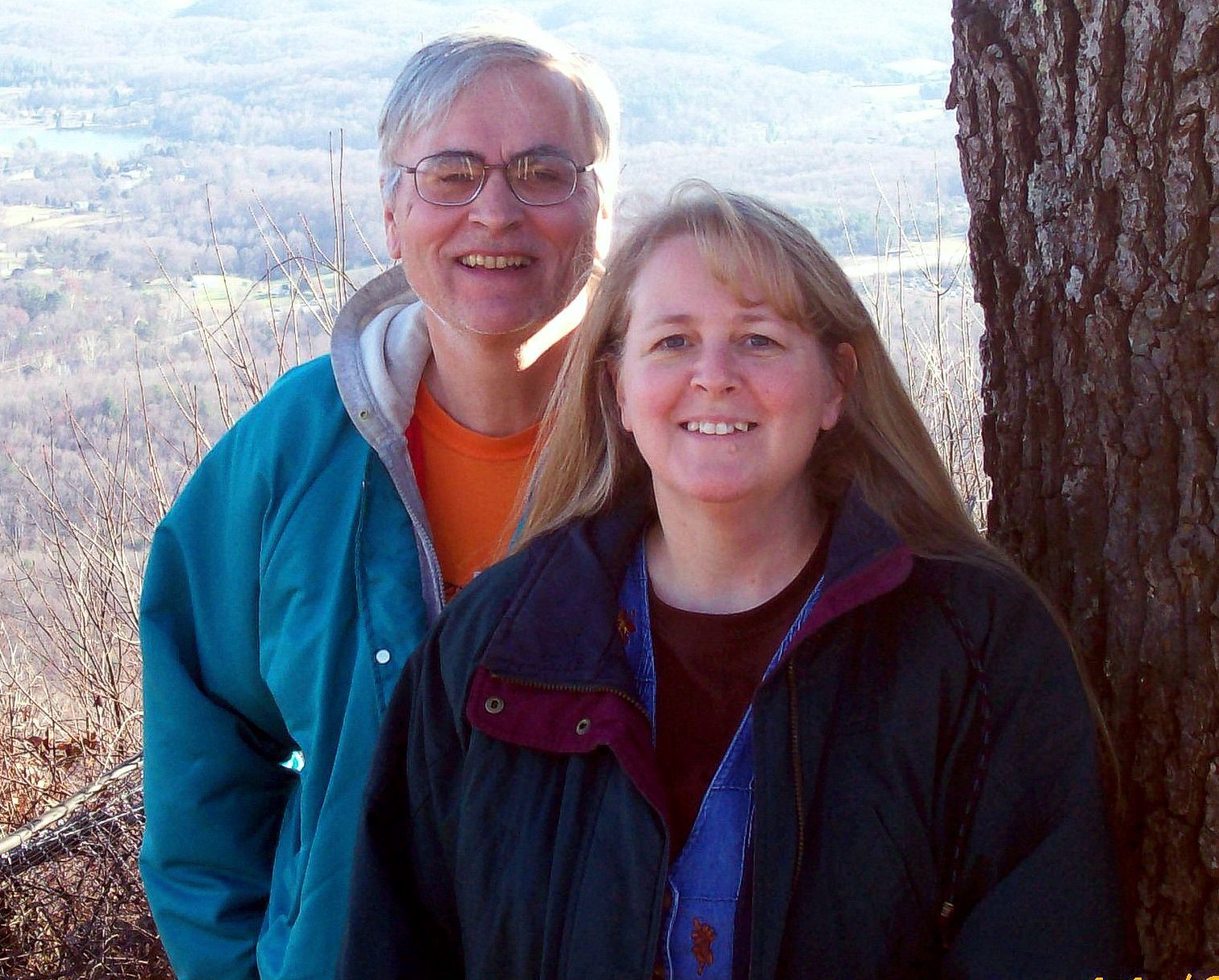 Since 1973, I have run my race.  This I have done by the grace of God and my Lord and Savior - Jesus Christ.

"But watch thou in all things, endure afflictions, do the work of an evangelist, make full proof of thy ministry.

For I am now ready to be offered, and the time of my departure is at hand.

I have fought a good fight, I have finished my course, I have kept the faith:

Henceforth there is laid up for me a crown of righteousness, which the Lord, the righteous judge, shall give me at that day: and not to me only, but unto all them also that love his appearing."